Davao City is the Philippines’ third most populous metropolitan area and the largest city in terms of land area (which is almost 4 times larger than Metro Manila). Davao City is the center of Metro Davao and one of the safest cities in Southeast Asia to live (according to a popular website).

It is also the most progressive city in Mindanao. Dubbed as the “King City of the South”, Davao City has a tropical rainforest climate that hosts some of Mindanao’s best beaches and several attractions. Moreover, the city is the center of trade, industry, and commerce in Mindanao and the regional center of Davao Region. The majestic Mt. Apo, the Philippines’ highest mountain, is just 40km away from the city proper of Davao.

With an economy as big as Davao City, the Dusit Thani Residence provides better shelter for young professionals on the go and those who want to have a temporary haven while they are on business or leisure trips in Davao. Even families will have a better deal once they are billeted in the Dusit. The Dusit Thani Residence’s location will bring you and the family closer to where the modern lifestyle is. Aside from its location near the international airport, the Dusit is near several schools, sports facilities, hospitals, commercial centers, leisure centers, and churches.

Additionally, Davao City’s central business district is a mere 10-minute drive from the site. For your information, there are more than 30 medical facilities operating in Davao City alone. Some of these hospitals nearest the Dusit Thani are the Davao Doctors Hospital, MMG Hospital, and the Adventist Hospital. 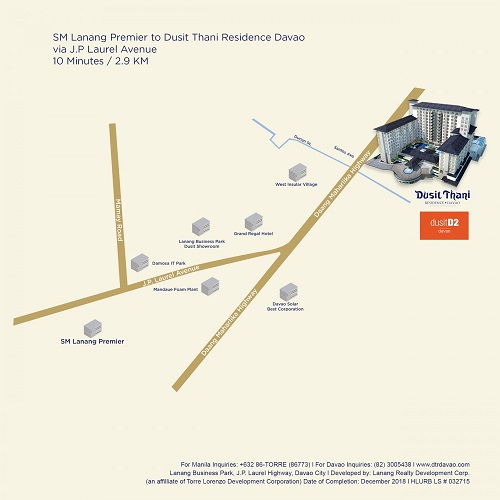